“When the whole business seems to have gone loopy, dip into Mel Churcher’s book; somehow she always makes sense. ‘A Screen Acting Workshop’ is a great book to dip into.” Bob Hoskins 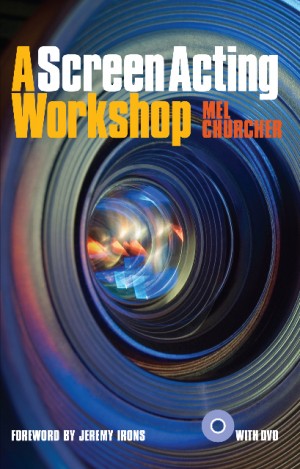 “…have been reading the book and watching the DVD, not sure how I ever survived reading acting books without DVDs!!” (email sent by actor, Jack Hawkins)

has just been published by Nick Hern Books. This is a practical workshop book/DVD designed to complement her original book ‘Acting for Film: Truth 24 Times a Second’. Also available from Nick Hern Books, see their blog page 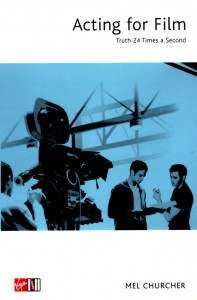 “I was on the set of film talking about you with some of the other actors. It’s “The Ghost”, directed by Polanski with Pierce Brosnan and Ewan McGregor and is being shot over here. In any case, I and several other actors were hanging around talking and it emerged that 3 of the 4 of us had your book with us and all were most enthusiastic!”

Why do some actors compel our attention on the screen while others never catch our imaginations? What makes film acting different from acting on stage or TV? This book is a guide designed for actors already working in film, for those who want to, as well as for directors, teachers and anyone interested in film acting. The majority of young actors have ambitions to succeed in the motion picture industry. But how do you do it? The author uses her wide experience as an acting and voice coach on major movies to offer insights into the film acting process. She provides tasks, techniques and tips that are designed specifically for film – there’s advice to make the first-time film actor feel at home on set, tips on the casting process, how to cope with auditions, on-camera techniques, schedules and shooting order, as well as specific advice from film crews to help an actor’s performance. This practical workbook combines exercises and anecdotes in an informal and accessible style, making it a useful guide for anyone wishing to light up the silver screen. It is also available in a Kindle edition.

Other published articles include:

“Shakespeare in the Open Air” in Shakespeare Around the Globe (Pub. VASTA 2005)

(Some articles may be read on Academia.eu)